Did you know that glyphosate is the absolute worst thing in the world? It’s like a spray of tiny Hitlers jackbooting the crap out of those weeds—and then jackbooting the crap out of your DNA somehow because chemicals. Also it kills kittens and cute endangered something or other. Anyhow, it sucks, and you should be afraid, and you should hate anyone who thinks otherwise, they are totally a shill. I swear it’s true, I read it on a picture with words on it on Facebook. 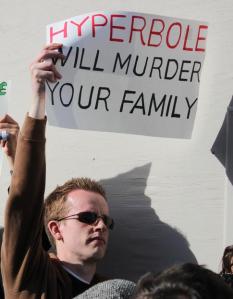 One of the things I find really interesting about the internet is that is gives us the opportunity to encounter a wide variety of people and ideas—and yet, instead of availing ourselves of this cornucopia, we often seem to surround ourselves with people we already agree with who are saying things we already believe in the angriest way possible. It makes us feel good.

There is a quickly-developing body of literature cataloguing and investigating the development of internet echo-chambers, which can be fueled by personalized Google results and Facebook algorithms and Twitter followers. We like and share snarky, self-congratulatory wanna-memes that give us a little hit of in-group support and then we move on without really thinking them through.

The thing that really fascinates me is not just that echo-chambers sometimes form, but that, once divorced from outside input, the pressure increases and the interior discourse begins to rise in pitch. The baseline shifts slowly, imperceptibly to those inside.

I think something happens to ideas once they are established inside an echo-chamber. We get ahold of an idea—maybe a totally reasonable idea to begin with—and start actively debating and contributing within the bounds of that idea. Maybe we ignore ideas that don’t agree. Maybe we forget that another idea exists. Maybe we start to ignore people who disagree. Maybe we actively shun those people. As time goes by, the baseline idea loses its tether to the real, nuanced world, and starts to drift. Everyone in the echo-chamber agrees with the idea, so there is nothing left to negotiate about the truth of it. All that remains is to negotiate the intensity of the idea.

Now the pressure is on. Now we have a hyperbolic chamber.

Let’s look at an example. Let’s say, the idea that herbicides should be effectively tested for safety before being approved for general use. Who would disagree with that? Except now that we know that, the real problem is the people doing the testing. Are you sure that effective testing for herbicides even exists? You think the testing out there is sufficient? Actually, it’s all industry shills! You think that herbicide was shown to be safe? Liars on the corporate payroll; we know it’s dangerous! Once we raise the concept of hidden corruption of the process, we abdicate any responsibility for testing our own ideas—we stop comparing what we think we know against any objective truth. You know what? We should really just ban them. All of them. No herbicides allowed. And anyone who suggests adding nuance to that position is a shill.

Because there is one lever that can pry open the walls of the echo-chamber and the hyperbolic chamber both. That lever is doubt. Try it yourself! When you see your friends sharing slightly hyperbolic framings of things you would otherwise agree with, don’t just like it and move on with a vague sense of unease. Instead, ask “are you sure?” Ask them. Ask yourself. Go do some research. Find someone who doesn’t agree and read what they have to say.