The trope of the Mad Scientist pervades popular culture and popular awareness. One of the major archetypes, Victor Frankenstein, embodies the trope as an obsessed man reanimating the dead through perverse experimentation. In some cases, such as that of Doctor Jekyll, the mad scientist engages in well-intentioned but equally doomed self-experimentation. In still other cases—Lex Luthor, for example—the mad scientist creates fantastical devices that enable his madness. Superhero stories are rife with Mad Scientists as villains and heroes both, though even the heroes seem untethered and at risk from their own brilliance. Tony Stark invents Iron Man suits in his basement out of devices he invented, yet his devices are constantly being turned against him. Even the delightful Dr. Horrible fails his endeavors mainly through the failure of his own inventions. For the Mad Scientist, their brilliance is also their Achilles Heel.

But are any of these really scientists? I rather agree with Sanjay Kulkacek who said we ought to call them Mad Engineers: 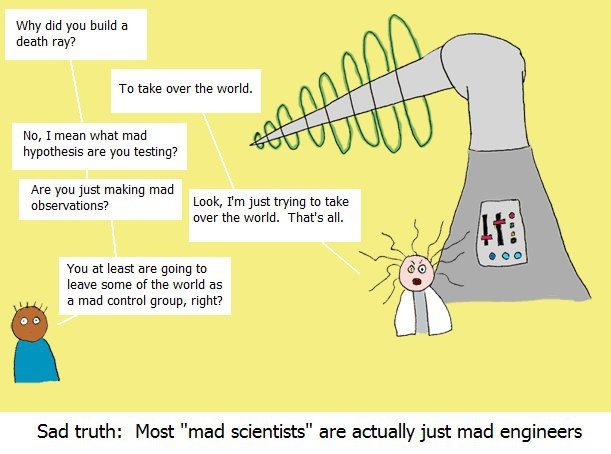 The Mad Scientist can be an entertaining character, but I fear the associations with science drag the public perception of science in the wrong direction. And the one feature of the Mad Scientist that I most dislike is their isolation, because when you take away the “mad” part, you are left, not with science, but with another mistaken trope: the Lone Genius. Of course, real science is collaborative, but that’s not how we, the public, tend to think about it. We’d rather imagine a Nicola Tesla holed up in a mansion inventing a ray gun than a collaborative group of hundreds of people carefully planning, funding, building, and launching a mission to Pluto.

At the risk of being repetitive, collaboration in science is fundamental. Understanding that is the difference between two opposing views of science: the first view is of a whimsical group of unintelligible geniuses who argue about whether eggs are good for you, but the other is a collective endeavor of humanity to achieve the best possible knowledge of the world.

In the first view, the public view, the view that underlies the majority of science news reporting, there is no way for the public to assess to truth of science, and thus it is a view that fundamentally mistrusts science. One person says one thing, another person says differently; how can we laypeople tell the difference? In this paradigm, we can’t even grasp the concept of scientific consensus, because every study on evolution or climate change is divorced from every other. Every scientist is just one step away from being mad.

In the second view, however, science is a body of knowledge. We can and do assess truth by consensus—when 98% of climate scientists agree that the earth is warming and humans are causing it, that means far more than any one study or argument by one dissenter. What’s more, we can look at the body of data to ask and answer questions about where the truth lies and what our best knowledge is at the present. That makes science—real science—accessible, but only if we know to look.