When I worked in wilderness therapy, changing minds was a regular part of the job. It was up to us, the guides, to help struggling teenagers reexamine their lives and make new choices. Sometimes that meant challenging their biases. It always meant challenging their assumptions. I valued that part of the work the most: the part where I got to see someone open their mind to a new way of looking at the world. But that was only the first step—in order for them to maintain their new habits, they had to return to an environment that would nurture their change and support them in making healthier choices. And that was something I had no control over.

Within our communities, and within our society, there is an inevitable inertia to our views. It starts, as I discussed in part one of this series, with our own entrenched ideas. Even if we change one another’s minds using the tools I outlined in part two, there remains a certain amount of inertia in the society around us. We who change our minds on controversies will be swimming upstream, fighting against the tide of the zeitgeist for a long while before the ship of public opinion finally turns. 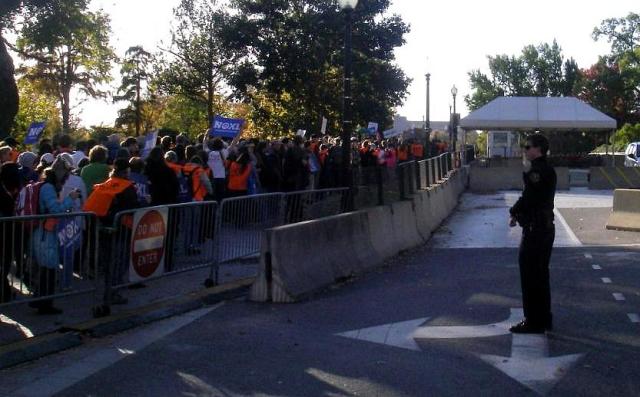 Advocates for social change sometimes suggest that changing individual minds is equivalent to changing the mind of society. We rarely say so explicitly, but too often we rely on some vague social alchemy to translate the beliefs of persons into the beliefs of the people.

In the course of researching for my Masters thesis, I puzzled out what I believed to be the five major components of an entrenched societal idea. In brief they are legitimacy, pervasiveness, inertia, organizational manifestations, and broad unconscious acceptance. To change the mind of a society, I believe we who advocate the change must address each of these components and ensure not only that we undermine the old idea, but that we build these qualities into the thing we advocate.

I believe climate change is a instructive example. Human-caused climate change is well-supported by scientific evidence, repeatedly evidenced in our climate and ecosystems, and yet confoundingly controversial in the public realm. We should have started responding to climate change two decades ago, but instead we seem locked in societal indecision over whether it really exists.

To consider how the idea of climate change interacts with the entrenched idea that humans can do what they wish to natural systems without fear of consequences, let’s look at each of the components I mentioned above.

Legitimacy is the acceptability of an idea in the public sphere. While the science has come down heavily proving human-caused climate change, those who have the most to lose have fought hard to maintain legitimacy for climate science denialism. When anything is a “controversy” in the public perception, what that really means is that there are two opposed viewpoints that are both considered legitimate. Racism, by contrast, is widely practiced but it is not acceptable to be publicly racist—it is an illegitimate idea.

Pervasiveness is how an idea crosses geographic, cultural, political, and other societal boundaries. The people who deny climate change, unfortunately, come from many segments of society, which helps maintain climate denial’s legitimacy as a belief. When an idea becomes restricted to a single group, the rest of society can often move on. When it remains pervasive, though, it remains entrenched. Racism, despite being illegitimate in public, is still pervasive.

I must observe here that, whatever the benefits of Al Gore’s climate advocacy, the partisan divide that resulted from it has been disastrous. By linking response to climate change with a pre-existing societal boundary, we have all but deadlocked the issue. In fact, I would go so far as to say the single most important thing to do in the world of climate activism is to find ways to engage Republicans in support of change. Until awareness of climate change becomes pervasive, it will be tough to make headway against climate denialism.

Inertia refers to how people interact with the entrenched idea; if they are pushed by society into one position or another by default, that idea has societal inertia. Climate change actually has fairly weak inertia at this point because the positions for and against it are to some extent equally weighted in the public mind. This is a bad thing for climate activists, though, because it maintains the controversy. In this respect, educating people on the science is critical because it makes it harder to accept the assumptions of climate denialism.

Organizational Manifestations are those structures already in place that rely on one idea or another and influence the behavior of society’s members. Inertia affects people’s individual views, but organization manifestations affect their actions.

Climate advocacy is vastly behind the curve on this, because although there are thousands of people working on clean energy sources, the majority of infrastructure is built with the presumption that fossil fuel energy is an acceptable large-scale energy source. Entire industries are built around exploiting fossil fuels, and governments are continuing to subsidize them. Changing these structures is unavoidably painful for a lot of people who will have to switch careers or abandon their investments, and the economic behavior of our entire society has to move away from relying on cheap energy if we are to achieve real change. In this sense, the organizational manifestations of climate denialism are creating massive behavioral inertia.

Broad Unconscious Acceptance is the final quality of an entrenched idea and describes how those people who hold an idea view it themselves. Here we can see a great deal of progress around the issue of climate change. As recently as the 1980s and early 1990s, it was easy to accept the status quo without thinking about it—gas was cheap, energy was cheap, and the climate science was uncertain. Now we’ve reached the point of controversy, so people on both sides of the debate cannot ignore the presence of an opposing view. That said, they still may not question their own view.

Climate denialism became entrenched decades ago through naiveté, and changing the mind of society is a slow process. Although climate change advocates have made some headway in legitimizing climate change and eliminating broad unconscious acceptance, the organizational manifestations and pervasiveness of climate denial remain an issue, and the inertia of the ideas is fairly balanced. To reach a point where society will respond to climate change and stop worsening the problem we need headway in all five components—we need climate denialism to become illegitimate, be restricted to a few groups of people, and be eliminated from our social structures like businesses and governments.

Through these five qualities of entrenched ideas we see the ebb and flow of societal beliefs, and we can begin to seek change on a level beyond that of the individual. The evidence may be clear on an issue, as it is on climate change, but that isn’t enough to change the mind of society. Nor is changing individual minds alone enough to create that change. We have those things, and still the “controversy” legitimizes the ideas that climate is not changing, or that if it is, humans aren’t causing it, or that if we are, it may not be a bad thing, or that if it is, we can only accept solutions the maintain the status quo.

In the previous two parts, I suggested concrete ways to change minds. I have changed my own mind, and I can suggest ways to go about that. I have helped others change their minds, and there is science to suggest ways we can do that effectively.

To change the zeitgeist, however, is to turn a much more unwieldy and capricious beast. My best understanding at present is that we must try to ensure that our work impacts the qualities I listed above. I cannot say precisely the best way to go about it, but I suspect the answer is all ways, and then some, and with all the energy you can muster.

One comment on “Changing Minds, Part 3: the Sentiment of Society”