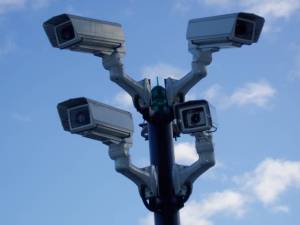 Every few weeks I read something new about privacy—and when I say “about privacy,” that is actually a very strange way to put it, because these stories are all about new places where we lack privacy. We call them privacy stories, but they are really about the encroachment of non-privacy on an ill-defined negative space. Reading these stories is like walking down the street alone, and then hearing footsteps behind you. You didn’t consciously expect to be alone, but it is still a bit startling and unnerving to discover you are not.

The most recent of these stories, for me, is an episode of Radiolab, about an aircraft-based surveillance system developed for the military, and what happened when entrepreneurs brought it to Dayton, Ohio. It’s fascinating, and worth a listen. At one point in the episode, Jad Abumrad says: “Here’s my problem with this, with all of these privacy stories. It’s like when you’re talking about these technologies, the advantages are always so concrete, and the tradeoffs always feel so abstract. I feel like there is something being lost here, but I can never quite put my finger on it.”

I feel that way, too, except I think I can put my finger exactly on what is being lost. What each of these technologies is doing is removing gradations of privacy. They are changing privacy from a spectrum to a binary state.

It isn’t surprising that we can’t always articulate that. The words “public” and “private” don’t acknowledge a spectrum of privacy, and we don’t explicitly talk or think about things as “a little bit private” or “kinda public.” We’re getting used to the idea of “public” being an absolute, but it didn’t used to be, and we still feel a twinge every time the old and new meanings run into one another.

The internet, I think, is the strongest driver of this shift. We’ve gotten comfortable, up to a point, with the idea that “public,” online, means the whole world. Regardless of what you do online, someone knows: your ISP, Google, the websites you visit, the NSA. Facebook asks us to choose privacy settings—“only me,” “friends,” or “everyone.” There is no longer an option for “people in my town,” or “people in my country,” or “people at my school.” Now we are not just individuals, we are individuals who must protect “our data” or, by default, leave power over that information in the hands of others. Mostly that means our actions are “public,” because, for the vast majority of us, actively protecting our data is a time-consuming task with no obvious payoff.

What unsettles us, I think, and what unsettled Jad, is that the new online version of “public” is also bleeding over into our physical world. We’re bad at naming that, but we see it nonetheless. There used to be both physical and temporal limits on public information. What your house looked like was information available only to those who went past on your street—now we have Google Street View. Where you went and how you got there and who you spoke to was information that was observed by those around you, but had to be painfully reconstructed by others—now, anyone with access to the surveillance footage can just click back through time and see for themselves. Even in a crowd, computers can pick out your face, identify you, and track you back through time.

All of these things, and many others, affect those gradations that used to exist between “public” and “private.” Everything that used to be in between is getting shoehorned into the “public” side of this developing binary, while at the same time, the idea of “public” has expanded. We’ve redefined “public” from “available to anyone nearby right now (a perhaps a few others)” to “available to everyone everywhere, and for the indeterminate future as well.” The end result of these shifts is that instead of having increasing levels of public, like concentric circles that follow us around, we are collapsing into two—the things we do alone or in very small groups, and everything else.

One’s first impulse may be to moralize this—to ask if is it a good shift, or a bad shift, or a neutral shift. If I had to guess I would say it’s all of the above, and then some, but I also think that isn’t the most useful question. I don’t think “how do we stop it” is a terribly useful question either, because we, as a society, have always adapted to new technologies and new norms.

What I think we need to do is to look carefully at this shift and recognize it for what it is. The history of our society shows us that the interests of the powerful are often different from the interests of most citizens—and that we can only advocate for our interests if we collectively understand what they are. I think that rather than moralizing or obstructing this shift in meaning, we just need be able to name it and discuss it. That, I think, is the difference between the norms we choose, and the norms that are otherwise imposed on us.