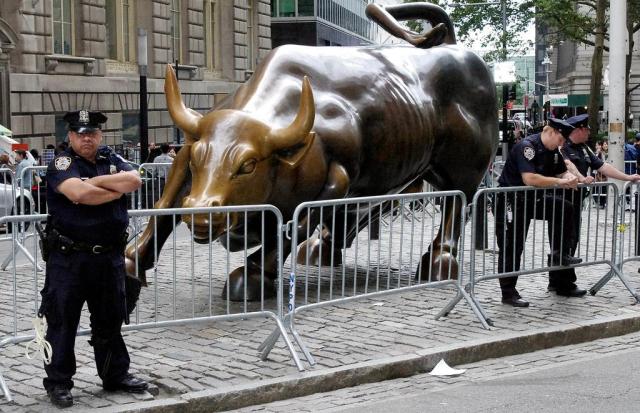 The argument that the poor are happily “sucking [the American] teat” evokes a self-satisfied group of freeloaders living like parasites on the stolen wealth of hard-working Americans—so it’s no wonder that it generates deep resentment of social programs. But the more I encounter this entrenched idea, the more I begin to realize that it is not just classist rhetoric; it is a the edge of an ideological statement about the role of the powerful in our society.

Consider the assumptions required to support this view. First we must assume that wealth from a growing economy is available to all and apportioned only by effort: that the son of a white multi-millionaire and the daughter of a poor black family have equal access to potential wealth. With that reckless presumption in place we can also conclude that those who have more have worked harder than those who have less. Finally we can assume that those hard-working folks who have more are the key to the health of the whole economy—that more given to the top will magnify and benefit the bottom, while anything given to the bottom will be squandered.

This is the Rich Man’s Burden: the idea that it is the inherent right and duty of the rich to guide and control society, for the benefit of everyone. The lazy poor should accept their lot and strive to work hard like the rest of us, not weigh America down with their basic needs. The Rich Man’s Burden carries with it all the old prejudices of the civilized over uncivilized, the manifest destiny of the powerful, and the duty of those blessed with more to take from the poor what little they have.

That naked classism might not stand, but fortunately there is a very old argument to prop it up—“it’s for their own good.”

The idea of trickle-down benefits crops up time and time again, and “job creators” is the latest incarnation, a reframing of the assumption that benefits given to the top inevitably magnify and support everyone. The phrase is bandied about on cable news, in political debates, in presidential races, and in the halls of government. Those who espouse this view do not argue that social well-being is unimportant, but rather that social well-being is not the business of government. “Market forces,” they claim, will translate the privilege of a few into the well-being of the many, and therefore one of the main available engines of equality—the government—should keep out.

This argument appeals to economics for justification, but it is merely an ideological claim couched in economic terms. Economist Thomas Sowell wrote with some irritation: “as someone who spent the first decade of his career researching, teaching and writing about the history of economic thought, I can say that no economist of the past two centuries had any such theory.”

The facts bear him out. If trickle-down ever had been an economic hypothesis it would have been long-since debunked. Emmanuel Saez, economist at the University of California, found that in the recovery from the 2008 financial crisis, 93% of the income generated went to the top 1% of earners. Richard Michel, who analyzed income data from 1982-1987 to determine if trickle-down theory had ever worked, concluded that “the rising tide may have lifted all yachts, but it has not lifted all boats.” Disturbingly, Michel also found that households headed by Hispanics, African-Americans, and single women—demographics often subject to prejudice-driven inequality—actually saw their income growth slowing when wealth was supposedly trickling down from the upper classes.

The evidence shows us that trickle-down economics has never accomplished its stated ends, but people are wedded to ideologies, and facts look fuzzy if you squint hard enough, and old ideas do not die easily or quietly.

The roles of the powerful and the powerless have been in contention in our society for some time, and possibly for as long as societies have existed. The White Man’s Burden bolstered the Western colonialism of the 18th, 19th, and 20th centuries, helped maintain the ruling class of Europe, and led to some of history’s most famous uprisings, the French Revolution among them. In the past it was the supposed duty of the White to civilize the Brown through religion and culture—and to take their resources along the way. Now, it is the supposed duty of the rich to civilize the poor through job creation—and to make money off their backs while they do it.

Consider the rhetoric that accompanied that old idea, itself a justification for imperialism, exploitation, and the enslavement of others. Powerful white men would speak unselfconsciously about the need to civilize the savages, to teach the less intelligent classes how to contribute to society, and to put to good use the resources squandered by dumb, lazy natives.

Or this, even more explicit, from South Carolina Lt. Gov. Andre Bauer, who spoke against public assistance for the poor because: “[my Grandmother] told me as a small child to quit feeding stray animals. You know why? Because they breed. You’re facilitating the problem if you give an animal or a person ample food supply. They will reproduce, especially ones that don’t think too much further than that. And so what you’ve got to do is you’ve got to curtail that type of behavior. They don’t know any better.”

If we abandon the debunked economic arguments and look at these statements for themselves, it is hard not to see the echoes of what has come before. The Rich Man’s Burden enshrines selfish decision-making as beneficial to all, and justifies old prejudices by couching them in economic rather than overtly racial or cultural terms. And we naively accept the new forms, and repeat them, and encourage them; through some alarming rhetorical alchemy, those who take have come to be known as those who give. And yet, we keep waiting.