It is easy for those of us men who consider ourselves feminists to sit back, contented in our belief in equality, and think that because we intellectually know women are equal, we have done our part. But the reality of our culture should shock us out of that complacent view. Simple belief in equality does not, by itself, change the experience of our society. Women are abused, raped, violated, coerced, and devalued every day. Every hour. Every two minutes.

There has been progress. Feminism has seriously challenged traditional perceptions of what women can do, and successfully made it far less acceptable (though not totally unacceptable) to talk about women as the property of men, or as less intelligent, or as less capable, or as less rational. Myths remain in many places (Google search “women driver memes”) but we are swiftly approaching a general intellectual acceptance, even among men, that women and men are equal. More often than not, 21st century men will agree that women can do anything men can do—or at least, they will say so in mixed company. 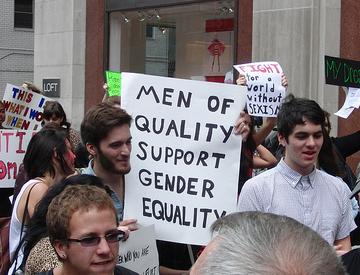 What has yet to happen is for many of those men who accept equality superficially or reluctantly to accept it intuitively and personally and publicly. And guys, this is why feminism needs you.

So, despite some foolish claims to the contrary, feminists do not seek to replace the institution of patriarchy with an institution of matriarchy—instead, we seek a set of societal norms, laws, and assumptions that does not discriminate on the basis of gender. The basic tenet of gender equality is not that men are less important, nor that maleness is somehow bad, nor that femaleness should be favored. Rather, it is that gender should not be a starting point for evaluating everything else.

Working from that framework, maleness and femaleness are both valuable and important, but neither should have exclusive or undue bearing on governance, societal norms, valuation of individuals, or the allocation of human rights. Such a proposition is not the only alternative to patriarchy, but I and many others believe it is the most just and socially beneficial. Yes, it would mean men would no longer have some of the privilege they do now, but no, it would not mean men would have fewer rights or freedoms. Instead, it would mean that men cease to enjoy power over women that trumps women’s rights.

No moral person can object to giving that up, but likewise no selfish person will do so by choice. And again, guys, this is why feminism needs you.

Pursuing gender equality cannot solely be the province of women. By its very nature, gender equality is not a “women’s issue” so much as it is a human rights issue. We declare it unacceptable to have a lesser-valued class of people in our society—but we have many such classes, of which women are one. It is the duty of all members of our society to undermine such inequality wherever we find it, to look for and reject the privilege it may afford us, and to build alternatives wherever we are able.

Men pursuing social change should pay the closest attention to these points because men are the ones least likely to recognize the benefits they receive from patriarchy. Men are also the ones most likely to ignore sexism in ways that harm the women around them. I do not expect a self-professed chauvinist or a narcissistic billionaire to change their behavior or relinquish their privilege. I do not expect a biblical literalist who insists on the validity of Paul’s limitations on women to change his mind about the value of women’s speech. What I do expect is that we who claim to pursue social justice will not betray the women around us by failing to notice our participation in a great social injustice, or by failing to do all we are able to remedy it.

I must stress here that my injunctions are not speculative. Issues like rape and male privilege are, in my opinion, the most insidious in the progressive organizations, movements, or schools where they are given the most official attention. Now, you may think this doesn’t apply in your communities, but please consider that it is statistically much more likely that you just don’t see it. Unfortunately, many of the same groups seeking to make social change still harbor sexism and prejudice towards their female members. That is the insidiousness of patriarchy—that even men who claim to stand for equality can fall prey to it and not even notice, while our female colleagues will be suffering the weight of yet another unsafe place.

If you are a man, try to imagine how much more a betrayal it is for a woman to be exploited and marginalized by men who earnestly claim to value her. Imagine how disheartening it is to find that, in fact, there is no refuge from prejudice. That is why I direct this point so explicitly to men involved in social change. There are times when just acting on your principals is not enough to create change, but failing to reflect the principals you avow can be more damaging even than obvious exploitation.

In 1983, Andrea Dworkin gave a now well-known speech to the National Organization for Changing Men in which she pointed out that rape is protected by religions, politicians, the laws, the schools, and, she said, quoting Shelly, by “the unacknowledged legislators of the world: the poets, the artists.” These are all of us: singers, writers, teachers, readers, commenters, bloggers.

One of the most important roles male feminists can play in our communities is to be the legislators of male culture. We need to gain ground especially in groups dominated by men, which could otherwise become reservoirs of abusive culture and continually re-infect broader society with prejudice. We are already seeking to be aware—so when we hear hate speech against women, we can reject it. When we see other men treating women as less valuable, we can condemn it. When we notice our male friends teasing one another with feminizing language, we can call them out on the assumptions they are supporting. Most of all, we as men can let it be known that we will not tolerate the devaluing of women. There is great power in the habits of the group—we must exercise the power of our membership to eliminate the social license to be sexist.

So, guys, our mission should be this: those “unacknowledged legislators” among us who espouse sexist views should find their positions untenable. We can’t and won’t prevent sexism from everyone, everywhere–but we can make sure than sexism around us fails in the face of an otherwise knowledgeable, self-aware, and motivated community.