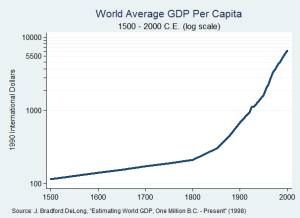 The ideology of economic growth is so entrenched an idea that it often goes unnoticed and unquestioned: the media, politicians, and businesses all frame more growth as good and less growth as bad. But “growth” in this proposition is ambiguously defined. In fact, our dominant national economic indicator, GDP, actually measures economic throughput, not economic growth—it measures the total value of services and resources used in a given year. Neoclassical economists assume that because a growing economy is correlated with a healthy society, a “healthy” neoclassical capitalist economy must always be bigger than it was before.

If you tried to apply this in your life, it would swiftly become ridiculous: for example, you would have to measure your bank balance by how much money you withdraw in a month instead of by how much is left. You would conclude that you were getting richer by spending more money every month, and ignore the rapidly shrinking balance until you had multiple overdrafts and the bank froze your account.

A rationale thinker may at this point ask how an economy can grow infinitely on a finite planet. The neoclassical economist’s answer is the proposition of infinite substitutability—that human ingenuity and technology will find the answer to any problems of scarce resources. In plainer words, the dominant economic view is that humans are infinitely smarter than natural limits and we will always find ways around them, so don’t worry about it.

Using my bank account analogy, this is the same as pretending your account is infinitely full of money, so you will never run out. If that seems like irrational, pie-in-the-sky thinking, it is: infinite pie in the sky. As economist and teacher Kenneth Boulding notably proclaimed, “anyone who believes that exponential growth can go on forever in a finite world is either a madman or an economist.”

Infinite substitutability based on human ingenuity is effectively hubris laid down as an economic principal. It discounts limits of materials and energy, presuming that we will always find a new alternative. In practice, though, human society has chosen to draw down stored energy faster than it can be replenished in the form of coal, oil, and gas. No amount of human ingenuity has yet created free energy and the second law of thermodynamics tells us that it never can. Nevertheless, the idea of infinite growth goes mostly unconsidered in year-to-year economic policy.

As Garrett Hardin put it, “a society that pays attention to economists needs economists who pay attention to reality.” To recognize physical limits, however, is not a popular position. In the United States, at least, there is a major incentive to ignore the problem of infinite growth—namely, ignoring it lets us rest easy on issues of economic inequality. If there is always more to be had, no one with more wealth can be blamed for the lack of wealth of others.

When I wrote about the Rich Man’s Burden, I observed along the way that some people assume equal access to all the benefits of a growing economy. The proposition of infinite growth is one excuse for that assumption: if there is an infinitely growing pie, the size of your slice may have no relationship to the size of anyone else’s. The proposition of an infinite pie sets up a carrot on a stick for disenfranchised lower classes: work hard to get more, because there is always more to go around. Following that, if you make a lot of money, you must be smart, creative, and hard-working; if you make little money, you must be dumb, rigid, and lazy.

Within this Rich Man’s Burden framework, it is easy to say we should cut the social safety net because there are “too many on the government teat.” It is easy for Representative Allan West to argue for cutting programs for the poor because “we in Congress need to do our part to aid the struggle for more personal responsibility. We need to reduce government spending levels so we are taking less from America’s producers of economic growth.” It is easy for business columnist Elizabeth Macdonald to talk about the “feeding trough” and “government handouts,” as if the people who need the safety net are lazy pigs. As if our grandparents who worked their entire lives should be bankrupted by the high cost of medications, or as if our children who depend on food stamps should just buck up and earn some money themselves. Maybe those poor children should just become janitors so they can learn how to work harder—a suggestion actually made by Newt Gingrich during his bid for the 2012 presidential nomination.

That heaping disdain traces back to the idea that growth gives everyone equal opportunity—but really it is just another excuse to continue removing opportunity from the worst-off among us to benefit those who need it least.

And so we are always chasing growth, because many people are in need and supposedly growth will alleviate that. Yet the majority of “new” wealth in the economy is captured by those at the top, not those most in need. The idea of an infinite pie sets up a constant moving target of financial stability that keeps those most exploited by the system hopeful, while the well-off continue to benefit from their labor.

With an infinite pie, the idea that anyone might have too much, especially we in the United States, need never enter the discussion. There is no such thing as too much—instead, it is always about more.