There is an entirely worthwhile debate to be had about how we name people in challenging situations. The more controversial the situation, the important this debate becomes. Finding the right words, the words that describe groups and events accurately, dispassionately, and without bias, is rarely accomplished without such debate.

Yet most every time these debates occur, there are those who leap ahead with labels instead of arguments. These people appropriate words and use them to push their perspectives as fait accompli, sidestepping the reasoned debate that might lead to a more balanced conclusion. When we are wise, we do not allow this manipulation. When we are unwise, we fail to notice.

People are fleeing Syria at the moment, trying to the best of their ability to escape a dangerous and hostile environment that threatens their lives and the lives of their families. They are risking their lives to escape, which should tell us something about their desperation and need. And, as it often does in such times, xenophobia has reached a fevered pitch in response. 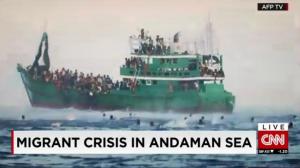 The clumsy have attempted to equate these refugees with ISIS, or with terrorism (a word itself co-opted long ago). The subtle, the propagandists, did not waste time making their arguments—instead, they went forth boldly to discuss a “migrant crisis,” advancing with their label an argument untenable in logic: that all these people seeking refuge are merely vagrants.

That we were slow to critique this word, that some continue to repeat it, and that only belatedly have we arrived at debate, suggests to me that we are not sufficiently cautious about such naming. This is not the only example, and sometimes we have gone much longer ignoring the question.

More than a decade ago, the United States invaded Iraq, toppled its government, and sought, without any clear understanding of the political or religious issues involved, to create a new government out of whole cloth. We drafted some leaders, left an occupying force, and scratched our heads as peace did not descend, as many Iraqis did not feel especially liberated, and as many people continued to die.

We did these things on false pretenses, and so I was not surprised when we explained them under false pretenses as well. We labeled the Iraqis who fought us and our created government as “insurgents.” We talked about quelling an “insurgency” as though these people were attacking an established body, rather than a piece of stage dressing that had yet to win the confidence or engagement of its constituency. The truth was so much more complex, and so much more difficult, than the label. Yet there was little public criticism, and the media embraced the “insurgency” as quickly as they have embraced the “migrant crisis.”

We have used labels, too, to justify ourselves when we have no justification. Just recently the Associated Press updated their style guide to stop calling deniers of climate science “skeptics,” a change those same deniers deeply resent and which has been all too long in coming. Because, of course, the label of “skeptic” implies a person who is justifiably hesitant, who is considering critically, and who is careful about beliefs and evidence.

Climate deniers were none of these things. Perhaps, twenty years ago, the term “climate skeptic” might have been justified. Even then the science was fairly clear, but there was justifiable debate about the extent of the problem. Now, when the only controversy remaining is political, the term “climate skeptic” is a laughable pretense. I continue to refer to these people as “deniers,” because I do not see how any other word is justified. The AP has chosen to call them “doubters,” but there is no doubt about the evidence—thus, their doubt is perverse and irrational, and to oppose the conclusions of climate science appears to me, inevitably, to be denial.

There is no way around the power of these names. Those doing the naming define the baselines, the scope, and the tenor of a conversation. When we say there is a “migrant crisis,” suddenly we have introduced doubt about whether we are obliged to help these people; instead, the debate is about whether the people fleeing and dying are truly in need. Likewise when we say there is an insurgency, there is no debate about whether we, in creating a particular set of rulers, were mistaken; instead, the debate is how to preserve that government. And when we let deniers pretend to be skeptics, we allow a debate long settled to continue as though it were not intellectually dishonest.

I cannot help but wonder how often these words are chosen intentionally, and how often they are simply summoned from the zeitgeist to serve as avatars. The former is duplicitous, and thus likely, and yet I think we are duplicitous with ourselves nearly as often as we are with others. And because we fool ourselves, we must be cautious to remember that a label is not an argument, and that it is incumbent on us to question its provenance and honesty. And I think also, we must question a bit more loudly.