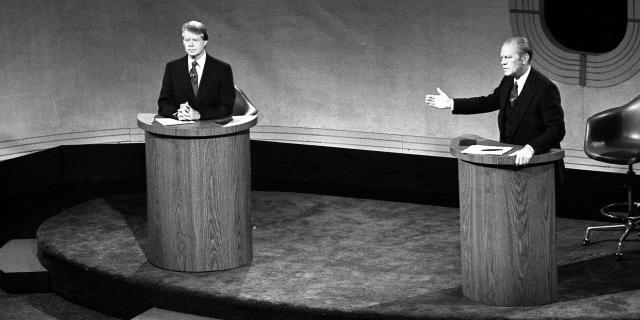 As someone who hasn’t yet watched the Republican or Democratic debates and hasn’t attended any campaign events, I rely primarily on reporting to keep abreast of the candidates and their positions. Or perhaps I should say “would rely on,” since the things reported in the media and things I want to know have essentially no overlap.

When we, the public, granted private companies the right to broadcast throughout the United States, we also asked for one thing in return: that they spend some time each day in serving the public interest. Thus was born “the news.” Yet the news, in its current incarnation, seems to have shuffled off the public interest in favor of the popular demand..

The things in the public interest to know, in my opinion, would be what positions candidates have taken, what policies they advocate, and what those policies would actually mean for the public. Are these policies feasible? Are they soundly supported by evidence? What are the upsides and downsides? Yet I am hard-pressed to find any mention of policies, let alone reporting that substantively analyzes those policies and discusses the evidence for and against them.

Hillary Clinton has been the Democratic “front-runner” (and already we fall into the horse race) for more than a year, since long before announcing her candidacy. But what do we hear about her policy choices? The media mostly describe them in broad strokes, and when they pass judgment it is out of partisan bias, not evidentiary analysis.

And what about the “leading” candidate on the Republican side, Donald Trump? Reportedly the media are so interested in interviewing him that he can make the absence of policy questions a condition of his participation. Some of his policies do hold the media’s attention, but only those that are so patently absurd (like the proposal of a giant concrete border wall) as to provide gawker value.

Even within the bounds of the horse race, the media can’t seem to base it’s reporting on evidence; instead they suffer from the worst form of confirmation bias: choosing a narrative early on in their coverage and defaulting to that narrative repeatedly, regardless of actual events.

Consider, for example, the coverage of Bernie Sanders (or lack thereof). If Hillary draws a crowd of 20,000 people, this is proof of her “front-runner” status, yet if Bernie draws a crowd of 25,000, it barely registers. Not that I think either of those should define a candidate’s viability, because position in the race has nothing whatsoever to do with value as a leader. At this stage of things, none of the general public has weighed in; the positioning in the race is mainly determined by punditry and biased polling—by candidates, of their supporters, and by media, of their viewers.

Nor is the bias skewed left or right; Donald Trump is, one would think, the undeniable “front-runner” on the Republican side, and yet the media generally treat him as an enjoyable sideshow. In their minds, he is unelectable, which is just the word used by pundits to make their personal biases sound like unassailable facts.

So what am I, a member of the public, to make of this? The things that are in my interest to know are not reported. The things that are reported are irrelevancies plagued with bias. The question of who would lead and serve this country best, and what their positions would mean for us, goes unanswered.

As a member of the public, the message I receive is that the collective governance of our country, and the democratic ideals on which it was founded, and the choice of who will define our polices—these are nothing more than sport.

That is not in the public interest.