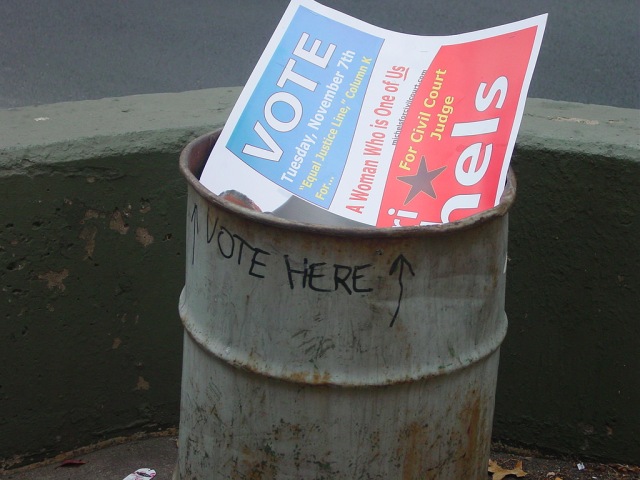 I can’t tell you how much I wanted something other than a Clinton/Trump election. But you know, I can tell you that I didn’t want it enough to avoid it. Sure, I didn’t vote for either of them in the primaries, and sure, I thought (and still think) that Trump was a joke, but I didn’t do very much to avoid this. In retrospect, I wish I had, but I’ll own that and plan ahead next time.

And in the meantime, I’ll deal with the choices I have. But I’m okay with dealing with the choices I have, because I don’t see voting as this big emotional weight. I see it as one strategic choice I can make to impact my country, but that impact is not huge. There are a lot of other things I could do that would have a lot more impact.

Which is why, as much as I want third and fourth party options as a regular part of our elections, I’m not about to cast a third-party vote in a close race. I don’t really want either of the options very much, but I also don’t need to shoe-horn my every belief into the ballot box. It’s not my only voice.

I rather think more people need to look at their vote this way: as one strategic choice at the end of a long chain, not as the one and only way they can participate. Otherwise, that feeling of being trapped in the two-party system is self-perpetuating. You feel like you have no voice, so you vote for someone who can’t win, which confirms you have no voice, and you carry on having no voice for four years until you do it all over again. And the rest of the country decides things without you.

Because the time to build a third party candidacy is years ahead of the election, not weeks. Waiting for the major parties to nominate people and then deciding on a third option later pretty much guarantees that person will have no shot.

So we need a third party that builds and excites and inspires, just like we needed this year. Well, by that I mean last year. 2015. That was when we needed the third party: when Bernie was barely on the table, Clinton was a boring inevitability, and the Republican field was littered with ineptitude and folly. That was the time to get people excited and build a movement. That was the time to inspire the nation with a solid choice for real policies.

But that’s not what we did. Just like every other time, our third parties are the guy frantically texting his friends at 7:00pm trying to convince them that he’s found a much better place for dinner, and never mind that they made plans hours or days ago and invited other people and have a whole evening already started, because the place he’s got is just so much better and he really can’t even stand going to those other places. What kind of person would go to those inferior places anyway?

Third party voters are being That Guy.

And we hate That Guy. At best he’s annoying. At worst he screws up everyone’s plans and we all end up somewhere we don’t want to be, and he still spends the evening complaining about it.

But guess what? Where you have dinner isn’t the be all and end all of your moral character. Neither is voting. It’s one choice, and it’s not your only choice. How much it counts depends on all the choices you made before that one.

So instead of being That Guy, be a host. Plan ahead. Build a movement. Invite the country to a nice dinner with plenty of time for them to realize they want it. Sure, that’s hard work. And sure, maybe you’ll still lose.