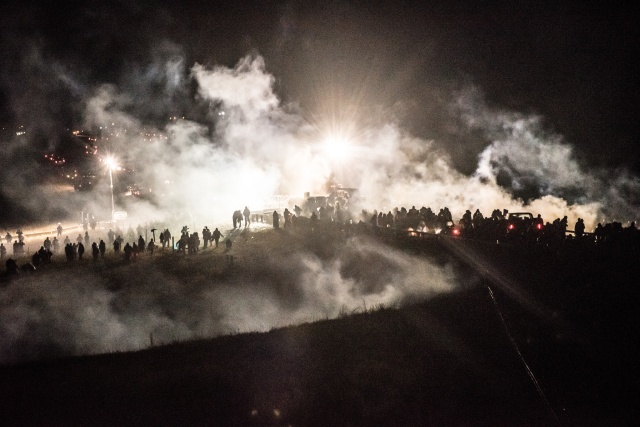 Whenever the state yields to a smaller, less powerful group, we are tempted to cry “victory.” And this is what many of us are doing now that the state has declined to permit the current route for the Dakota Access Pipeline. To some extent, it is a victory; it is, at least, a short respite in a conflict that has been escalating for months. So, in this moment to breathe, I think it worthwhile to discuss what this moment tells us about violence and the use of force.

It thus is clear that the use of force is a privilege of the powerful.

Consider another case: we claim, in our constitution, that the right to bear arms is a right of all people, yet the constitution was written for white men. If you are a black man, your supposed right to bear arms is supplanted by the state’s right to kill you for doing so. And even if you are a sovereign nation, like the Standing Rock Sioux, your right to the most basic exercise of force (in this case, non-violent blockade is treated as a use of force) is supplanted by the state’s right to use force against you.

So I would like to consider, for a moment, what a temporary victory like this costs in our society.

The Standing Rock Sioux and their allies have been subjected to assault by militarized police, using non-lethal but nonetheless harmful, even maiming weapons. They have been subject to assault by private military forces and attack dogs. They have been sprayed with water in freezing temperatures (which in another context would be considered torture). All these things are legal if used by the powerful, but not otherwise. They are all violent uses of force, and they may all be employed against you for the crime of failing to comply. Further, in our society, there is no direct mechanism for objecting to the legal but harmful actions of the state.

It is important to note that the state, in this case, is not—it is actually a private company acting with the support of the state. Private companies, too, are part of the powerful, and they, too, are entitled in our society to the use of force. They can take your land forcibly by eminent domain. They can take your life for the crime of trespassing on their property. They can employ the state to take your life for even appearing to threaten their property. They can even, in this case, attack you on land they do not own for a project not yet approved to accomplish a goal that would harm you, and benefit them and them alone.

Disagreement and non-violent obstruction, even as an act of self-defense, are treated by the powerful as justification for responding with force.

Most recently, white men were entitled to use force against the state illegally, but without consequence, merely to express their discontent. The Bundy Brothers seized public land with an armed encampment, refused to comply with the state, refused to follow the law, and were never assaulted or molested in any way. In fact, the forces of the state treated their protest, illegal though it was, as justified by default. Similarly, stand-your-ground laws make it explicitly legal for the powerful to express their fear, justified or otherwise, with deadly force.

So is it a victory when a sovereign nation achieves, after extensive pain and sacrifice, after suffering brutal assault and violence, a minor concession from the state or a private company? We can argue it shows the value of protest, direct democracy, and collective action, which I suppose it does. Yet I cannot help but look instead at the deep cost one must incur to challenge the state, and what price is paid when the less powerful have no choice but to act.

Consider also what it means that it is an agent of the state that achieved this victory: the Army Corps of Engineers refused to grant a permit. This refusal was in their power for the entire duration of this project, and nothing about the objective circumstances has changed. The danger of contamination has not changed, the proposed route has not changed, and the objections of the community have not changed.

So I have trouble considering this a victory when it feels so much more like an indictment. The denial of this permit was paid for in suffering, but the price was not paid for the victory itself; it was paid for our attention.

I think we cannot accept that price. We cannot allow the use of legal violence against the non-violent to be the measure of our commitment. If we do that, it is not the companies invested in this pipeline or the actions of the state that are setting so dangerous a price. We have set it, here, and in the communities of the powerful all throughout our nation. We have set it, and affirmed it, and declared the threshold at which we pay attention—we, the powerful, will pay attention when the less powerful are hurting or dying, and even then only when the option of quiet cowardice is gone.

I don’t know how we change this, but we must. Until we do, the violence of the state is our own.