What happens at the end of a system? The American Chestnut used to be one out of every three trees in eastern hardwood forests; now there are a few blighted remnants, a few resistant individuals hiding in the far corners of what few forests remain uncut. The system has moved on, to a sparser, less self-sufficient balance. But what happens when the system can’t adapt? What does it even look like to us, human beings who struggle to think in systems and who shift our baselines faster than natural systems move?

END_OF_DOCUMENT_TOKEN_TO_BE_REPLACED

Individuals both daring and careful have paved the way for us to not only see such things, but to understand. Slowly, the great scientific minds of humanity have reasoned and tested their way into a world much larger and older than even the most exotic flights of imagination. Not content with a hand-waving dismissal of history before History, we have asked ourselves “why” and “how” so many times that we can now trace back the creation of our world to its temporal horizon: the big bang. This event is the current edge of our knowledge, and beyond it, time itself seems to have no meaning.

END_OF_DOCUMENT_TOKEN_TO_BE_REPLACED

The steady drumming of falling water is meditative as it strikes the marble. Every drop eats away an imperceptible fraction of the stone, carving scallops and flutes more perfect and delicate than any sculptor could manage. One by one, crystals of calcite and graphite melt away or give up their bonds with one another to go skipping down the passage in liquid suspension, deposited later as flowstone or sand elsewhere in the cave, or washed completely down to the aquifer. Some are returned to the surface when the water gushes from a spring. Infinitesimal bit by infinitesimal bit, the stone is being relocated.

This is the entire origin of caves. The rooms and passages of this cave are the footprints of the stream that made it, a living negative space through which we may humbly travel. Standing in this room, looking at the water, I contemplate the shapes of the stone. The room is fishbowl-shaped, telling me that the waterfall, which now tumbles over a far edge, used to enter this room where I did, in the center. It splashed, pooled, and swirled to form this chamber. Where the water now enters is a fluted pit the size of a closet; it has been falling there for some time to carve away so much rock, but not so long as it spent where I stand. And behind me is a narrow crack with a channel leading to a different passage entirely, smaller and older. Everywhere are the signs of what came before. 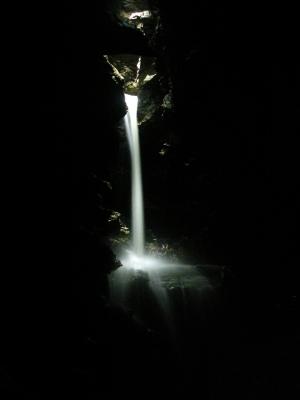 Following the tracks of the water in my mind’s eye, I see this cave forming. Water follows the joint for a long while, perhaps thousands of years, before volume overwhelms the small passage and begins to carve my fishbowl. Eventually, all the water poured off the ledge above where I stand, eating away the marble for more thousands or tens of thousands of years—but higher in the cave, erosion was working just as strongly. Eventually, relatively recently in the cave’s history, the water bypassed the ledge above me and ran along through the wall to my right to enter the room where it now falls, each drop of water building on the work of billions that came before it. To me, this is beautiful.

The cave is beautiful without this knowledge as well. Deep flutes and grooves sweep through the walls, scallops are cut into the floors, and the entire form is laid into a white crystalline marble with jet-black highlights. Imagine walking through cookies-and-cream ice cream, and you will have some idea of how this marble looks in cross-section. The black is in chunks and streaks, bits of other rock that were broken up in the marble as it formed. The white is lightly banded in shades of off-white and cream, scattered through with sliver crystals of graphite that catch and reflect light like a field of glitter. Up close, I can see the tiny, interlocking crystals of calcite and graphite in the walls. At a few inches, the walls of the cave seem to be made of jewels.

This, too, has a history. The story of the cave is the story of the water that made it, but the stone tells a different, older story. Marble is limestone that has been buried deep in the earth, subjected to the great heat and pressure thousands of feet below us, and then exhumed by erosion. Usually it is smooth, and the crystals are almost invisible to the eye—this marble was cooked for millennia to form crystals so large. When it was buried millions of years before, it was limestone inter-bedded with shale and dolomite, but rocks are not static things; deep in the earth, on a scale of thousands of years, they move like plastic or putty. The limestone recrystallized to form the pure white marble, each crystal growing for millennia. The dolomite and shale became tan marble and schist respectively, and, less plastic that the white calcite, broke apart in the matrix as it was compressed. Eventually, the whole complex was lifted by the geological movement of the earth on a continental scale, thrust upward even as the surface eroded away. Eventually, perhaps a hundred thousand years ago, the marble was close enough to the surface for water to begin its work.

The limestone and dolomite and shale, the parents of this marble, have again their own history. They were laid down in the shallow seas below a great mountain range that ran through this place more than a billion years ago. They were the accumulated bits and pieces eroded from those mountains by the waters that ran through gullies and caves of their own, long before humans ever existed and before all but the most simple forms of life even graced this planet. Those mountains in turn were lifted by the colliding plates of the crust of our earth, then torn down, replaced and torn down again many times since.

Now, more than a thousand million years into the process, I stand in this room, watching water carry off the stone to lay it down elsewhere, as it will continue to do until the whole of these mountains too are leveled, and their detritus builds new rock that, in a far future, may hold another cave. Brushing the wall with my fingers, I am touching the rough traces of a billion years of history, and more, as the mountains that made this rock were assembled themselves in depths of time so impenetrable that they defy comprehension.

This is one reason I visit caves—to stand in a place where the shear weight of history is intoxicating and touch time itself. To see, as the famous geologist James Hutton wrote, “no vestige of a beginning, no prospect of an end.”