Dig your hands into the dirt. Run them along a smooth board. Reach down into the engine, through the grease and wiring. Use your hands stiffly in the cold, or damply in the sun, or dry in the dust. Use your hands with steadiness on the wheel, with certainty on the brush, with a slight tremor that disappears as you focus on the finer work. Use them with care, and strength, and intent, and work something you can touch and own.

This is common ground.

I wrote that we need common ground, that we have to find it and till it and protect it. That we cannot occupy it, and do not need to. That the only way through is to find places we have drawn lines and erase them. I think this is one of those places.

END_OF_DOCUMENT_TOKEN_TO_BE_REPLACED

There are things you can say in polite company, and things you can say in private; we all know this, and yet we profess shock upon hearing publically those things we deem for limited specific company only. But it isn’t the sentiment we reject, it’s the form: we have an entire structure of polite register that allows us to express private sentiments publically, but less directly. That is, after all, the structure of formal English—to say with euphemism and evasion those things we could say bluntly with a more limited audience.

So there are really two kinds of shock to pick from when someone breaks these rules. One kind is shock at whatever private thing has been laid bare, no matter how it was said. The other kind is shock at the breaking of convention, and cares very little about the sentiment involved. For politicians, masters of gaming the rules, it is the breaking of those rules that requires response. For the rest of us, as decent human beings, it is the sentiment that requires response.

Thus we have now two kinds of shock that occur in concert, and thus also we have the strange discord inspired by dissonance: these two notes seem to ring together, and yet they ring false. END_OF_DOCUMENT_TOKEN_TO_BE_REPLACED

People have been going on forever about returning to the good old days, the days of their youth, and the days when America was great long before Donald Trump ever got hold of the idea. Longing for the days of yore is baked into our society, to the point where the very idea that something is old, to many people, gives it weight. So we trust in ancient remedies, recall days of chivalry and valor, and yearn for good old Nuclear Family America.

Unless we studied History. Those of us who studied History know that yearning for the good old days dooms you to an infinite wait at the lost luggage counter for imaginary bags.

END_OF_DOCUMENT_TOKEN_TO_BE_REPLACED

Acadia National Park has something called a “Bates Cairn,” a particular kind of trail marker that uses one large rock bridged across two others, with a single rock on top angled roughly in the direction the trail is running. These are beautifully simple structures, easy to interpret, and easy to observe from far away. Since many of Acadia’s trails run along granite slabs, the Bates Cairns are often the only prominent indicator of where trails run.

The Bates Cairns also use far fewer rocks than the conical cairns built in many parts of the world, which really does matter. The Acadian landscape is scoured granite, with pockets of soil clinging to rugged slopes and fire-adapted ecosystems sneaking into every corner they can. Foot traffic has a major detrimental impact on these thin soils, already stressed by wind and weather. Wandering off in search of rocks to add to a cairn, as some hikers may do, can damage or destroy rare plants and hasten erosion. So the Bates Cairn, in addition to being traditional in Acadia, solves a real problem for one of America’s most visited parks.

But Acadia National Park also has a problem, which is that some people (like this one) think that both the tradition and necessity of Bates Cairns in Acadia should be outweighed by their own personal tradition of adding rocks to cairns along their hike. And some do so with apparently gleeful disregard. In the course of one day’s hike, I came upon three signs explaining the Bates Cairns and asking visitors to respect them, and in all three cases the cairn following the sign had been tampered with.

Each time I encountered a vandalized Bates Cairn, I removed the extra rocks, wondering what imperious or vindictive person would so casually disregard the landscape around them. What is it about a tradition that allows it to go from lovingly marking community to viciously assaulting an other? Surely the Bates Cairn was doing these hikers no harm, and surely they came to enjoy the beauty of the Acadian mountains. Why, then, when faced with a choice between satisfying their personal preference and respecting the place around then, did they choose the former?

I think, perhaps, ignoring the Bates Cairn and printing it over with one’s own tradition is an act of smallness. I think it is not so much an intentional violation of the world beyond one’s self so much as it is a negligent unawareness of that world. I imagine that the individuals who add rocks to cairns when they have been asked not to, and told why, are the same individuals who shuffle their lunch wrappings into the great crevices in the granite, who trample past the signs for revegetation areas, and who return, sated and ignorant, to their homes with tales of Acadia’s beauty.

For them, perhaps, beauty is a thing to be consumed rather than appreciated, and the marks of their passing and presence are marks of beauty well-consumed indeed. But what of the hiker behind them who follows, seeing damage done by those who came before rather than care well taken? What of those children (and there are many) who hike the Acadian granite domes, witnessing their consumption at the whim of elders? Who will teach these others to take care? Who will teach them to return to their homes with tales of places seen and loved, not consumed?

Some of us will. I hope, enough of us. 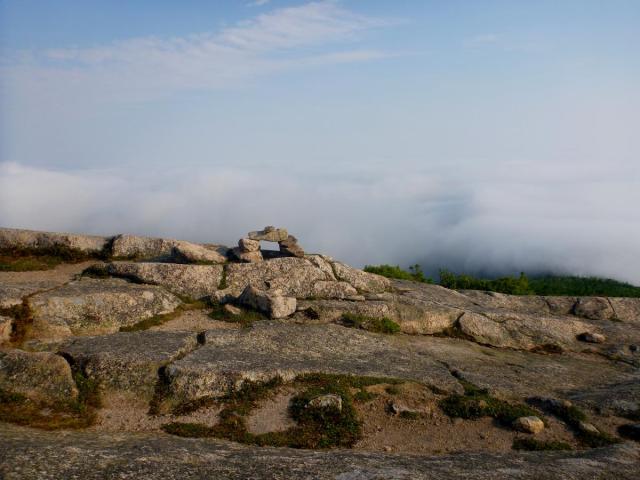